Campaigners have condemned the lack of protection given by UK employment law to trade unionists falling victim of employer blacklists. They were speaking out after an 8 March written judgement from the first full-merits blacklisting Employment Tribunal, Dooley v Balfour Beatty, found in favour of the company.

Balfour Beatty did not deny using an illegally compiled blacklist to target bricklayer and union activist Mick Dooley. Instead it used documents it had made available to disgraced and now shutdown blacklisting organisation The Consulting Association in its tribunal submission.

While the judge, Mr BT Charlton, described blacklisting as “ghastly”, he found in favour of the construction giant because while Balfour Beatty has sought Mick Dooley’s dismissal, it wasn’t his actual employer – and the law only covers employees.

According to campaign group the Blacklist Support Group: “In an industry where sub-contracting and agency labour is widespread, this effectively allows the major multi-nationals such as Balfour Beatty, Sir Robert Mc Alpine, Skanska and Costain to blacklist workers who complain about safety or unpaid wages with impunity (as almost all labour is sub-contracted out).”

A spokesperson for the group said: “The Dooley decision and the new Blacklisting Regulations are basically a get out of jail free card for the major contractors. The blacklisters can hide behind the fact that they sub-contract most of the labour on major projects to escape any kind of legal responsibility.

“The new regulations will not make an ounce of difference to the likelihood of success for any blacklisted building worker seeking legal redress. If the new Regulations fail to make any difference for workers who can prove they have been blacklisted, what is their purpose?”

The Consulting Association “conspiracy” is a clear breach of Article 11 of the European Convention on Human Rights, he added. “The Blacklist Support Group send out an unambiguous message today: if our human rights cannot be upheld in the UK courts or from UK Regulations, then we will be taking our claims to the European Court of Human Rights. We have suffered for many years: we are prepared to fight all the way.” 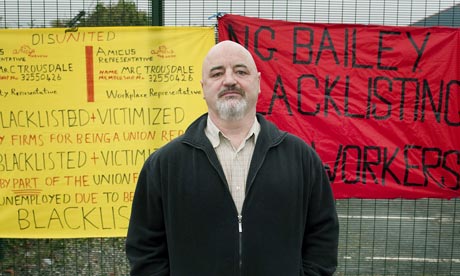 According to the government, the likes of Trousdale should get better protection from new laws due before Christmas. Draft laws have already been the subject of a consultation and do not have to be debated and once published, can be signed into law by the business secretary, Lord Mandelson.
END_OF_DOCUMENT_TOKEN_TO_BE_REPLACED